21MAR11
I have opened a new page called samples. Hi-lites from my illustrated stories. Will add more later.

18MAR11
I have added three more pics to Sgt. Alcock. I think I'll take this story on. But you'll have to wait if you think its worth it


02MAR11
Spunk ads
I've added 3 more ads to complete the set. In a future world it may be possible to buy fresh semen. The way it would be obtained, marketed and sold would be quite exciting. Using some of my favourite pictures I have
created the kind of ads that would be available. It was fun

Sgt. Alcock
I have had some drawings of a hairy bearded police sergeat laying about for years. I have knocked them together as the beginningt of a story. They could be the start of a new hero, maybe to rival Stoke. What do you think? 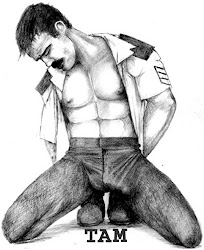